Usuarios/as
A túa cesta está baleira
Horarios: Luns a sábado (excepto martes) de 10:30 a 14:00 e de 16:00 a 20:30 / Martes de 16:00 a 20:30. Contacto: [email protected] / 981 560 250
Between 2005 and 2009, in a remote religious Mennonite colony, over a hundred girls and women were knocked unconscious and raped, often repeatedly, by what many thought were ghosts or demons, as a punishment for their sins. As the women tentatively began to share the details of the attackswaking up sore and bleeding and not understanding whytheir stories were chalked up to wild female imagination.

Women Talking is an imagined response to these real events. Eight women, all illiterate, without any knowledge of the world outside their colony and unable even to speak the language of the country they live in, meet secretly in a hayloft with the intention of making a decision about how to protect themselves and their daughters from future harm. They have two days to make a plan, while the men of the colony are away in the city attempting to raise enough money to bail out the rapists (not ghosts as it turns out but local men) and bring them home. 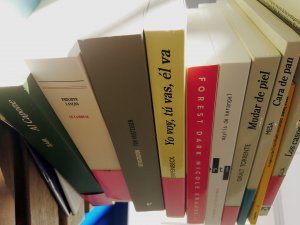